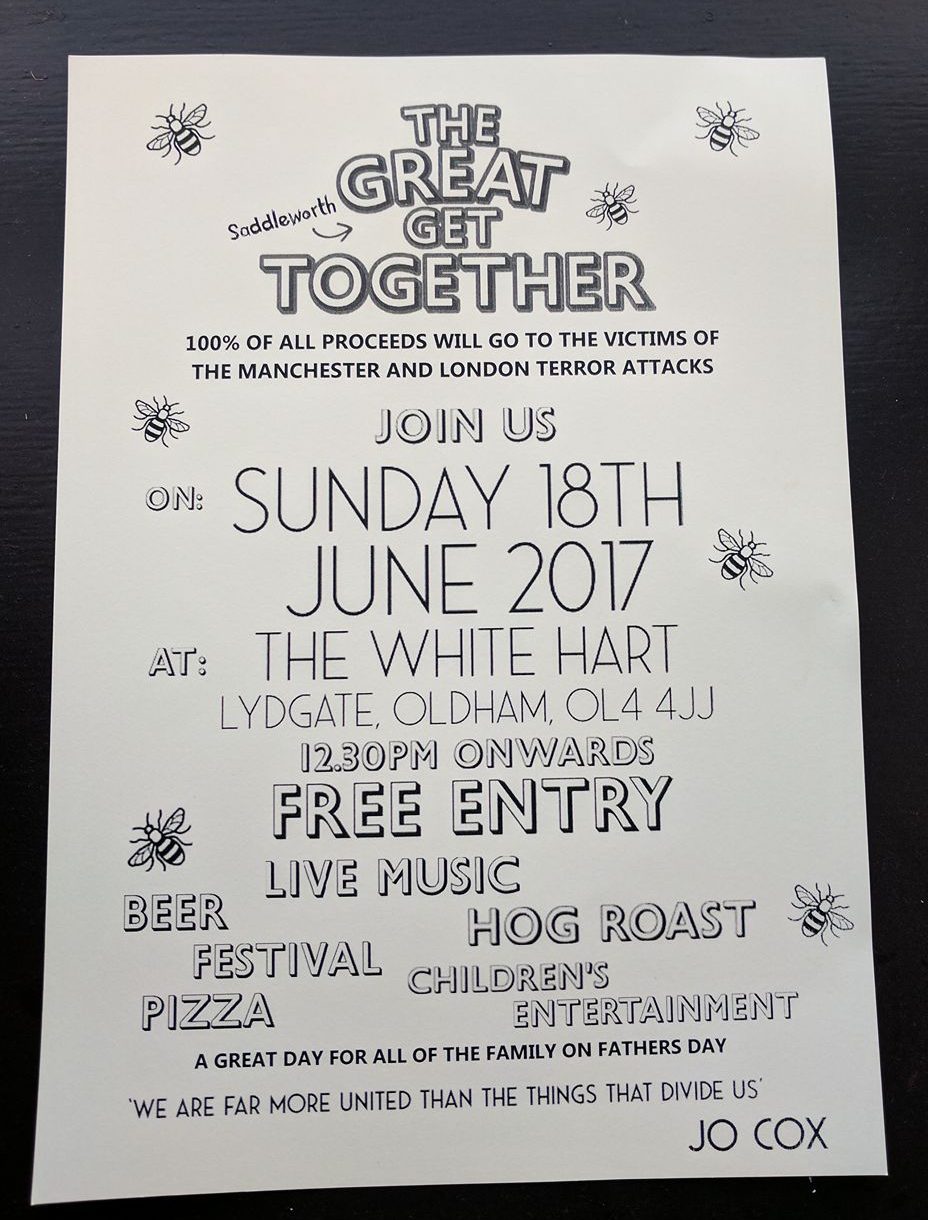 Home » News » The Great ‘Saddleworth’ Get Together

The Great ‘Saddleworth’ Get Together

Community groups The Saddleworth Round Table, Love Lydgate and Saddleworth 41 Club ‘Got Together’ to make the Great Get Together happen on Sunday 18th June.

Hosted in the new Pavilion and gardens of the White Hart, the event was attended by more than 500 people during the afternoon.  All proceeds from the food and drinks served in the Pavilion go to the victims of the Manchester Terror attack through the Red Cross.

The event raised £6,160 for the victims of the Manchester terror attack; with further generous donation coming in.

‘the generosity from suppliers was unprecedented’ says Charles Brierley, ‘this meant there were no costs for the beer festival, wines and soft drinks, plus the hog roast and pizzas.  Over 20 volunteers worked tirelessly all afternoon in the heat of our hottest summer day to date.  Entertainment, again provided FREE by Anthony Kinsey and his band, as well as the Pennine Singers, meant for a real party atmosphere and with 50 raffle and auctions prizes donated by local businesses, even more funds were added to the proceeds.’

Jenny Greenwood of love Lydgate says “This genuinely was a Great Get together. The population of Lydgate is about 300 and we doubled that on the day with representatives from all aspects of the wider community. It was wonderful to work with so many volunteers from all the different groups and the staff at the White Hart who pulled out all the stops. Great atmosphere and a tremendous effort all round. Thank you, we couldn’t have achieved it without everyone who came along.

Henry Burbridge and Dave Mac of Saddleworth Round Tables said “We have been utterly overwhelmed by the support of the local community for the event, in light of recent events I believe people really wanted to get behind the Get-Together and this was very obvious with the amount of people who attended. We want to thank everybody involved in helping out on the day as well as everybody who attended, without your support we would not be able to donate such a large amount to a worthy cause.”