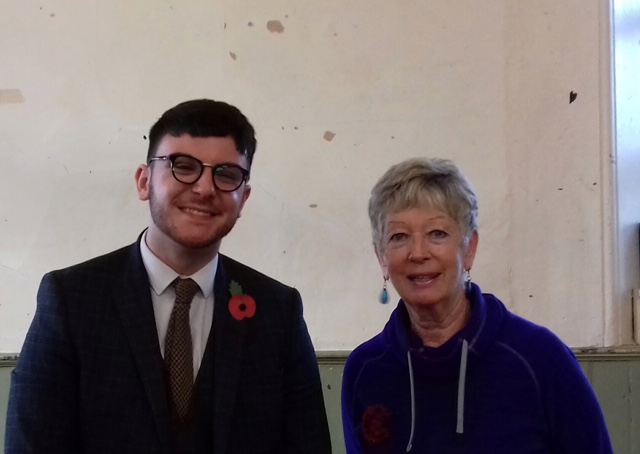 Our Monday talk today was given by Joe Wheeler, a young man of 17 who is already making a name for himself in Saddleworth at least.  He is the first chairman of Saddleworth Youth Committee, which organisation he helped to set up with Saddleworth Parish Council.

Joe hails from Springhead and attended Saddleworth School.  He became so frustrated by the fact that the new school that was being planned when he was in his first year had not even been agreed by the time he was in his final year.  So he spoke out and people said “well done” and again, when the school was wrongly charged with banning poppies for Remembrance Day, he spoke out.  He said that he realized then that one voice could make a difference and why should that voice not be his voice?

The Youth Committee set out to discover what people wanted to see in the area and, yes, they wanted a new school, but also cheaper houses, as young people felt that they would be forced to move out of Saddleworth because property was too expensive.

The Youth Committee has also been working with the Parish Council and Oldham Youth Council to tackle many problems pertaining to young people, such as lack of leisure facilities, adequate mental health treatment and support, and the things that they worry about, knife crime being at the top of the list.  It has also been liaising with others trying to make Saddleworth safer, such as Lee Hudson, who has set up a Greenfield Crime Watch  Committee, similar to the Neighbourhood Watch, and is encouraging each village to host a meeting about crime, not to instigate a vigilante group, but to make people aware of what is going on in their area.

Joe, obviously wants to improve things and thinks that he would like to become a Parish Counciller, ideally an independant one, but realises that purse strings are controlled by the political parties and that independance  may not be possible.

A political career is clearly in his sights and he is hoping to take a relevant degree at York University and then, who knows?  Maybe a future guest at our Monday talks will be a certain Joe Wheeler MP!